If you’re a parent of a school-aged child, you’ve probably heard of the so-called “Summer Slide.” The idea is that extended time spent away from school causes students to regress a bit. In other words, they may—hypothetically—forget information they learned throughout the year.

Our Las Vegas Montessori school team has a message for any of our families concerned about Summer Slide: Don’t worry.

Above all, while there is some validity to Summer Slide, it is important to remember that Montessori students have a particular defense. At Innovation Academy, classes are not about rote memorization and standardized tests. Instead, we teach a lifelong love of learning.

As a result, Innovation Academy students are intrinsically motivated to learn. There are no clear separators between the classroom and home when it comes to gaining knowledge. To clarify, that means children can academically grow anywhere.

Summer Slide does make some sense, in theory. The idea is similar in concept to climbing an icy mountainside. If you stop actively pushing forward, not only do you fail to make progress, but you also begin to slip backward.

Anyone can easily picture this physical regression. Because of this, it’s also easy to translate the image to other endeavors. For example, you watch your kid swimming, playing games, or simply lying around when not in class. Meanwhile, memorized facts and figures could be vanishing right and left.

Research does show that student’s achievement scores tend to drop between the start and end of summer. This can be a real problem. On the other hand, summer learning loss (as the phenomenon is also known) presumes that learning is a uniformly steady progression.

Again, picture an icy mountain. A climber starting at the bottom should be higher after several hours, then higher, then higher again. If you check in and the mountaineer is lower, that represents a setback. 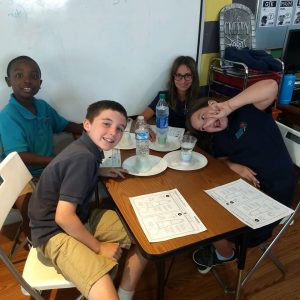 In learning, as in life, there is no single obvious A-to-B path in every situation. Yes, some children move fairly steadily from point to point. And some children spend a great deal of time acquiring one skill, only to rocket ahead with surprising speed. Others frequently revisit familiar concepts as they move forward. Still others “jump around” as they explore subjects and activities of particular interest to them.

To stick with the mountain-climbing metaphor, there are different approaches to tackling a peak. Some solo climbers will chart a direct path to the peak. Others will work as a team, making camp and moving on as the environment allows. Climbers with specific skills will feel more comfortable scaling bare rock, while others will take the winding path marked by ups, downs, and switchbacks.

Above all, they all have something in common: They are all working their way to the top at the pace and in the way that makes the most sense to them. They feel safe, they are making progress, and they are—more than likely—enjoying their unique journey.

So, with so many learning styles out there, how did the idea of a universal Summer Slide come about?

In short, it’s about standardized testing.

Many schools get funding, in part, based on student test scores. As a result, teachers emphasize information that will appear on standardized tests. The idea is that more students doing well means more money for the school.

Unfortunately, that also means students are treated more like components in a money-making machine than as individuals with varied interests, goals, and learning styles.

Because standardized tests rely on repetition of facts and figures, memorization becomes the primary point of typical education. This tactic can be effective in the short term. On the other hand, dates, processes, and vocabulary words can trickle away during a hiatus from active classroom learning. That is to say, unless a teacher is constantly reinforcing the information, it’s not all going to stick.

Contrast that with the Montessori model, which encourages children to explore subjects of their own choosing at their own pace. Learning is guided for each individual, as opposed to applied with a single broad brush.

This is not a free-for-all, however. Children learning under the Montessori model are not puttering around. In fact, it’s quite the opposite! When they are free to explore—with a goal in mind—children pick up math, language, and other vital skills naturally. Suddenly, as a result, practically everything becomes a learning opportunity.

The end of this 2020 school year looks different from any other we can remember. Students have been learning at home for months, so the switch to summer is going to be less of a transition than usual.

That said, we encourage you to continue helping your student learn by encouraging exploration. Read books about favorite subjects. Cook together, measuring out ingredients and doing the necessary math. virtually visit a museum, listen to music, play a board game or three, walk in nature, and more.

Your student will be just fine when school starts again in the fall.

Keep up to date with Innovation Academy by “liking” our FACEBOOK page!